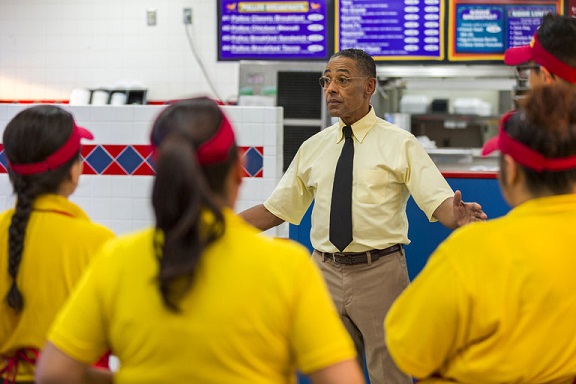 I tend to wonder if people truly understand how astonishing it is that this show exists. I find it bizarre. Not as the Breaking Bad fan who would eat up any namedrop, reference, or cameo from the previous show, but for how careful, yet unafraid the writers are to build significant story around pre-existing plot established prior by one of the greatest shows of all time, and yet nothing is being diminished in the process. We also get this subtle, exhilarating lawyer drama between two brothers. It’s impressive and unique how well it all works as a single entity. I’d sooner trust Gilligan and Gould to skip across a mine field, because despite instances like the LPH sign reveal having a little too much oomph than it should have, there’s still a mountain of execution that’s being done right when it easily could go the other way.

When we’re reintroduced to characters like Hector, or Gus, or now DON ELADIO, it’s not some one-off webisode or SNL skit that allows the actors to stiffly reprise their iconic roles. Instead, no beat has been skipped and we’re in the thick of a very heavy world once again. It’s insane that on Monday nights, in 2017, Gustavo Fring is radiating from our televisions where an incredibly relevant story is taking place. In 2013, or better yet, 2011, I would never have believed what we’re being shown right now. And surprisingly, now that the novelty/hype of anticipating his return has settled, it’s now that I’m genuinely excited. It’s been in the back of my mind, but I had a feeling that in addition to Jimmy and Mike having their parallel storylines, Gus could serve as somewhat of a third where the show could follow him independently.

Not only is the show not shy to do that, but the cold open proved that anyone could be subject for exploration. Of course, Hector plays a big role in Gus’ world, but I loved how much more context we got on their rivalry from Hector’s perspective. In a scene, no less, that actually portrays these baddies with a lot more humanity than we could have expected since the ending to Breaking Bad’s “Hermanos”. I like that Don Eladio busts balls in the same way Tony Soprano would with Paulie or Christopher, even if there’s still that underlying layer of “don’t piss me off”. We can only associate Don Eladio with blood and poison, so it’s nice to get a scene like this. As for Hector, he’s absolutely unraveling. He’s like the Duck Phillips of the Cartel. That last shot of him standing over the pool in the cold open couldn’t feel more marginalizing.

I was actually worried from a writing standpoint when Gus shoos his employees away after they were just forced by these strange men to stop business and stay put in the restaurant until Gus showed up. I wasn’t sure at that point in the episode, how committed the show was going to be to make every beat plausible if we are to follow Gus as a character. One of those beats being to give credibility to the common, innocent characters. In a lesser show, like say, later seasons of Dexter, the show would rely on Dexter being the brilliant, interesting character, while everybody else, especially the common folk, to be idiots. I was prepared to be very critical if they just played it off that just because Gus is the boss, and a fan-favorite or bad-ass, that he’d be allowed to be vague in the face of his employees’ curiosity towards him. If there was no follow-up explanation to what transpired, there’s no way I would have been able to buy it, which is why I was so happy when the episode did this:

The scene accomplishes so much. Not only is it giving credit to the employees’ intelligence, but it helps emphasize the severity of Hector’s behavior. For him to whip out a cigar and stroll behind the counter while his back-up serves as further intimidation, you feel how much of an effect in tension something like that would have. It adds impact. I also like that when Gus approaches the restaurant, a squeegee is at work to frame him as completely exposed. There’s no way he’s not entering the place without owing them an explanation/apology, and especially no way he’s going to pretend that those strange men were anything but bad people. It’s through great writing and Giancarlo Esposito’s awesome delivery that manages to make what he says brilliantly convincing and funny in how he spins it into his American success story. He’s not telling them the truth, but he’s putting a lot of his honest self out there in order to channel plausibility. When everyone is fooled, it’s earned, and it makes me laugh every time Lyle applauds. On top of all that, a Gus who is concerned for his employees well-being and state of mind is always interesting and fun to watch, even if the primary goal is to save face.

Another moment in this episode that I would have grumbled at is if Mike didn’t spend time with his family. It’s one thing that we haven’t seen Stacey and Kaylee since, I believe “Fifi”, but if Mike was to follow through on his “not tonight, I’m busy with my super secret life and I’d rather have an ambiguous moment alone” routine, I just think it would have been a missed opportunity. It’s good to remind the audience that this guy has a family and for this particular episode, it helped show how misplaced he feels now that he’s put a significant dent into Hector’s world. Even Stacey could see how troubled he is. This is the first episode where Mike’s story seems to float through everyone else’s. He’s caught in between a destiny calling upon him to work for Gus, but he’s also drawn to dabble in Jimmy’s world. As Gus says later on, Mike was trying to correct something that can’t be corrected (good samaritan getting killed, echoes of his murdered son) which is why we find Mike taking an interest in just simply fixing something. Now that his stint against Hector is satisfied, Mike is still at a state of unease, so the hour served as Mike figuring out how to compensate for that. If it means retreating to his quirky ally in Jimmy McGill for a con with lower stakes, or get dragged into a more high stakes future of fixing stickier situations for a major drug kingpin, something’s going to give. Even if it means juggling both, it has to make sense for him, so I can’t wait to see how he figures himself out in these upcoming episodes.

At 0:51 in this video, is it just me or can you feel anger rising in Gus? Not towards Mike, but out of of envy for him. Mike has freed Hector from his mind, which is something that’s impossible for Gus. Especially in an episode where he had to deal with Hector’s bullying presence while maintaining a friendly composure. It’s no wonder his real feelings are shown in this moment here and it says a lot to how much he respects Mike for him to disclose these true feelings. Other than that, those music cues used sparingly when the scene hints towards these characters’ futures was perfect. Necessarily operatic.

It’s crazy that I’m just now getting to Jimmy’s part of the story, which is hard to get into because I’m absolutely at a loss for what is being set into motion. If we were in a fog over Chuck’s plan at the end of the season premiere, then this is the situation reversed. I don’t know what it means to Kim and Jimmy to get Chuck to admit there’s an original tape or where he keeps it. I don’t know why so much emphasis was put on the wording of ‘damaged vs. destroyed’ (I mean I get it, but is this meant to play into their strategy?). I don’t understand what ammo Mike’s covert mission in taking photos is going to provide or why the lantern sitting atop the Financial Times is in any way important, if at all. I can’t tell what’s being said off the cuff and what actually will end up playing as a major push in their favor, but I know all of these stray puzzle pieces are going to form a clever picture. Anybody have any ideas on this? Are we heading into some complex technical lawyer territory or is a more unorthodox manipulation at play?

I will say that I loved Kim reprimanding Chuck and Howard as if they’re a couple of misfit boys up to no good. I forgot that the last time Kim actually was in Chuck’s presence was when she finally decided to own up to her support for Jimmy in “Nailed”. A moment where she finally escaped out from under Chuck and Howard’s thumb. “I’m putting you both on notice” is just about one of the coolest lines you can give her if she is to be consistent in her attitude towards them. Going back to the meeting, I like how all the characters greet each other by just announcing each other’s names, minus Jimmy saying Chuck’s. Jimmy’s apology to Chuck was also great in how subtly back-handed it was.

Some other stuff to note:

-Mike and Chuck meet! How did the universe not collapse on itself? More great use of humor here too. As much as I support Chuck on a lot of things, it really is jarring to see Chuck talk down to him.

– I wish they would put the episode up on demand so I could get the exact lines, but If you listen to what’s heard on the tv when Mike is at Staceys new house, you can hear something along the lines of “He’s not near the truck!” followed by some mention of an alien or UFO. The truck stuff is all in reference to what Mike’s been keeping busy with as of late, but the mention of an alien just feeds more into the notion of Mike feeling misplaced.

– Not only do we see the return of Don Eladio, but Juan Bolsa as well. At this point, it seems Breaking Bad characters are being reprised at an exponential rate.

– Mike throwing the cash through Victor’s driver’s side window is probably what inspired Victor to throw the bag of cash through Walter White’s window in “Green Light”.

– Kyra Hay making small talk, warmly, concerning Chuck’s condition was actually a sweet moment. I don’t know how Chuck took it for her to go into it, but nonetheless, it was a generously human break, on her part, amidst the tension in the room.