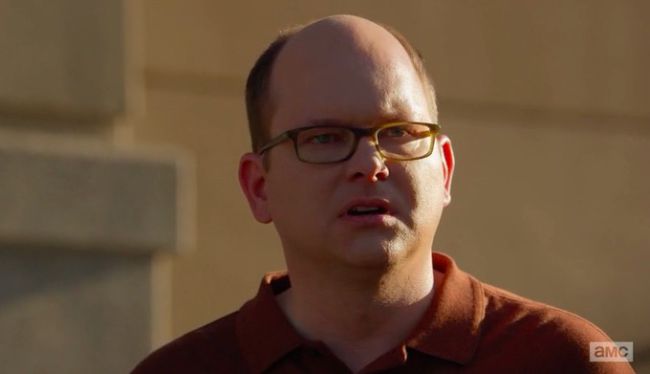 I watched the first episode again last night before the second and I just want to say the wood aesthetic of the new firm gives me a twin peaks vibe, but even more than that, I’m picking up on this ‘monkey with a machine gun in his new habitat’ vibe. It’s a new subtle jungle gym and even Jimmy’s fire place comes off like it was specially made for a zoo exhibit. Not that an animal would need one, but there’s something very brute and obtrusive about it, yet it fits the environment of that office.

I wish I could find a framegrab of the opening shot with the metronome because (not that I’m saying this was the intention, this is just the crazy feeling I got) but the wooden decorative ridges on the piano stand (at this point I thought we were back in Davis & Main) looked like….a monkey’s tail haha and then the metronome next to it reminded me of Walt’s machine gun. Again, not commenting on symbolism or intention, it’s obviously vague but just the feeling/thought that sparked from that shot as soon as I saw it. It would in turn relate to what Chuck’s feeling throughout that whole scene. The reveal that we’re with him and he’s playing “Sicilienne” on the piano was good. This is a piece that is actually intended to be played by two people, one being on piano and the other on cello, so it was pretty fitting that Chuck would want to play that on his own.

This episode was really strong and I love what we’re getting so far. Just like in breaking bad you get these episode titles where you don’t know what the context could possibly be and by the end of the episode you’ll never forget it. It sneaks up on you too whether it’s in last week’s “switch” or a more specific title like “cobbler”. I knew this was going to be one of those episodes but even with 10 minutes left, I couldn’t tell you how it was going to work it’s way in. I love how the action is in Saul’s mouth during that scene. I actually stood up in involuntarily as if I was watching a shootout, but all it is, was just Saul killing it.

Mike and Nacho’s standoff was really good. I love how Mike plays Nacho the same way Nacho would play Price, but at the same time Nacho holds his own so it just makes it all the more fun to watch. Michael Mando is great here and I even loved his calm vocal delivery of “he thinks you should go somewhere else” (paraphrasing) while being physically blunt and intimidating behind the boss’s back in the same line. I love that this show can offer breaking bad-esque confrontations like this and then give us very well-played boardroom drama at HHM between Chuck and Jimmy. That anxiety and battle of encouragement between Chuck and Kim. Just really heavy stuff.