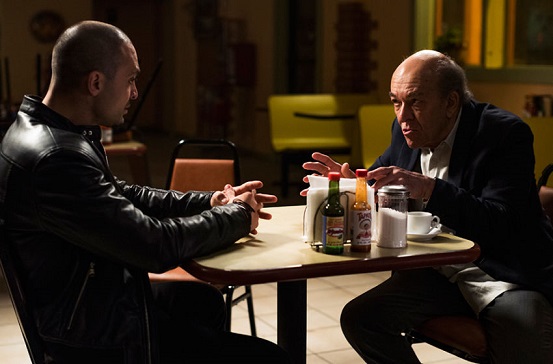 After an episode which rightfully omitted Mike, Gus, Hector, and that entire world, this was probably the best episode to follow “Chicanery”, mostly because it hit some major notes in order to earn further investment. For one, right off the bat, we’re given a cold open that serves as the thesis to finally explore a character, who up until now has been held at a certain distance. I like how we know that Ignacio/Nacho is going to play a significant part for the overall show, yet we’re only fed so much of him. At the same time, I always craved more focus for him, so as to round out the character more, and get more inside his head. This episode did just that and it was the perfect opportunity to do so as the other main characters figure out what’s next for themselves. Not only do we, as an audience, witness the first act of utter violence from Nacho, but also the sheer, conflicting weight that he carries. The beatdown that he regrettably is forced to strike upon Krazy 8 (disturbingly choreographed like something out of The Sopranos) translated like an ironic act of protection for his victim. I have no doubt that if Hector wasn’t there to bear witness to the brutal punishment that Nacho gave, and Krazy 8 was simply allowed to squirrel away after coming up short, as well as speaking out of line, then Hector may have very likely ordered him to be killed. The last thing a spiraling hot-headed Hector needs right now is further emasculation and insult to the reputation he’s trying to keep.

The small moment of Nacho losing control of the needle told so much. The dangerous life he leads is starting to bleed and intertwine into his closest retreat of a safe haven. Nacho holds up a stern, cool, front as Hector’s operative, even with a gun pointed in his face, but my word… that expression when he’s walking away, unlike from an explosion unflinchingly, but instead a desperate elicitation of “I don’t want to be here”/”I don’t want to be doing this”. I believe Nacho is a guy who has no problem being a criminal and being part of a criminal organization, but despite being a ‘tough’ when he has to be, he doesn’t prefer it. He’s not Jesse Pinkman, but he does have humanity in him. I imagine when he was in the presence of Tyrus and Victor, he saw himself in them. He was among true peers in that moment, those of whom are smart and no-nonsense working for a much more well-collected, level-headed, business man. And yet, they’re unfortunately enemies. I don’t doubt that if the opportunity ever presented itself possible, Nacho would want to work for a guy like Gus, where things run smoothly. Now that Hector is grossly and inconsiderately trying to invade Nacho’s personal life, the options of fight or flight seem incredibly imminent.

The following is just a pool of thought, but It’s a pretty easy thing to consider that Nacho could very well be the reason, whether indirect or not, that Hector ends up in a wheelchair. “Off Brand” opens with a damn good cup of coffee being poured using an overhead shot, where it’s revealed it to be Hector’s, followed by the entire cold open of him playing Nacho like a puppet. It’s of course in this episode that Lydia surprisingly makes an appearance which was odd because I couldn’t help but think of her when that coffee was being poured. Now, before I continue, no, I don’t think anyone is getting poisoned or anything like that, but it felt symbolic that Hector who’s increasingly propping himself up to be an antagonist to Nacho, would get an opening shot like that, especially when the episode ends with Nacho taking Hector’s pill or just overall health into consideration. The pill, representative of Hector’s well-being, even has the same color scheme of the Breaking Bad logo, which otherwise would represent his fate. Finally, this really has nothing to do with anything, but the shot of Nacho in his father’s upholstery business with all those chairs (while not wheelchairs) floating askew on the ceiling was an odd enough image. Make what you want of it, but now that Hector’s about to strong-arm his way into this place, there’s no way I wouldn’t think of Hector’s future if Hector was in that room. Again, I’m merely speaking on vague images that evoked a thought, not that these images mean anything.

We’re heading into new territory at this point of the season, where the fallout from last season’s finale has reached a final verdict. It’s not to say the drama or story has subsided, but the characters are at a point of reevaluation as we go forward. First things first, I just want to say that opening with Kim painting Jimmy in a final positive light for the courtroom, while being intercut with Rebecca in the taxi as she heads to Chuck’s home, is one of the more truly powerful, movie moments that this show has ever provided. It absolutely floored me how perfectly poignant and cinematic the payoff of that was. There’s something so romantic and heart-breaking about someone significant who’s not even in your life anymore. knocking on your door and running around the dark house to get to you, out of absolute love and concern for your well being. The level of empathy you need to have for somebody in order to do that is tremendous and it’s so easy to write it off and take Jimmy’s lead, his own brother (and most of the audience), who just revels in Chuck being put in his place. When Rebecca approaches Jimmy and Kim, she’s absolutely right in that he is mentally ill and he’s just been put through the most devastating embarrassment of his life, which makes the Mesa Verde hearing out to be a joke in comparison. God, that look on Chuck’s face when Rebecca is at the back door, eyes shifted towards the window like a lizard in a catatonic state. I teared up at that.

Also, the music that’s playing…go back and listen to it because it’s hitting every correct emotional note from when the crane shot pulls up over Rebecca when she gets out of the taxi, to the dramatic drop in bass towards the end of Kim’s line: “However, as to ethical violation 16-304a, the state bar’s claim of destruction of evidence, it categorically did. not. happen.” It’s so atmospheric and I must have watched that entire sequence over 10 times. I mean Chuck is completely aware of the monster he’s made out to be and I believe he’s aware of how unhealthy his obsession to derail Jimmy is. He’s concerned for himself and sure, Jimmy gave birth to a physical version of Saul Goodman, but Chuck also became someone else in this episode. The moment where he comes out of his lair in the dead of night, wearing mylar like a superhero about to fight crime (catchphrase: “Let justice be done, and the heavens fall”) showed a very strange version of him. One that brought up the question again, what’s going to happen to this character? When Saul Goodman billboards, park benches, and tv spots become rampant in ABQ, is this what Chuck will become? Just some strange loon who’s great mind is deteriorating to the point where he’s disturbingly roaming the streets. Nobody caring who he was?

I love though that this a desperate attempt to contact his doctor, which is essential because now that Jimmy won’t be around to provoke access into Chuck’s head, he’s going to need a Dr. Melfi type to help explore what he’s going through. Up until now, Howard has provided that, but you can only get so much now that the hearing is over. Any further mulling over Jimmy is just going to clearly be petty. It’s time for Chuck to really help himself and I’m hoping we’re going to learn of his psychology, dive deeper into what his condition could mean, and get a better context of the exact moment it actually began to show itself. As for Jimmy, he’s got an entire year to figure himself out and it’s like I said in my review for the premiere in regards to the black and white cold open, that “this show is about to take a major and scary acceleration forward”. I can’t imagine Better Call Saul allowing Jimmy to sit on his hands, making commercials for an extended amount of episodes. I believe we’re approaching a hefty time jump soon, even if it’s still to a point before Breaking Bad. I also wonder if Jimmy’s interest in elder law is about to dissipate in the boredom of having to wait a year. I mean, at least within less of a week, he’s already done this, quite passionately despite needing to do it:

Kim’s expression in the thumbnail says it all, as well as Jimmy’s. I keep thinking back to the ending of “Inflatable” where Kim first offered the idea of them being separate solo-practitioners under the same roof. That final deflated look that Jimmy has where he kind of has no choice but to compromise suggested him realizing her rejection in his full, true self. In defending Jimmy in the stretch of episodes since then, Kim has proven an allegiance towards him though, which sort of alleviated any further doubt that they’re meant for each other. However, now that the case is settled, this last scene kind of brought things back up again. In Kim’s mind, she has to be wondering, “who is this guy that I’m on the couch with right now?” This wasn’t a commercial for Davis & Main with Jimmy’s sincere narration or even ‘Gimme Jimmy!’ as a celebration to the eccentric Jimmy that she knows, but this commercial was like getting pied in the face. Her reaction translates almost like she’s aware she’s not going to be in Breaking Bad. A ticket for one.

– I liked the make-up girl/film student brushing Jimmy’s face almost like she was painting a picture as Saul Goodman began to be conceived. Also the montage of Jimmy calling his clients had some really funny moments (“and how did he pass?” *eek*, “you stop talking and I’ll talk”, “I don’t know where those sounds are coming from sir, you’ll have to check”) and maybe it’s just because I’m waist deep in a Twin Peaks binge, but the light-hearted, off-beat drumming felt like something you would hear out of said show’s sheriff’s station during its more quirkier moments.

– In consideration for a possible, upcoming time jump, many characters are kind of in place for it. Mike is attending Stacey’s group meetings and will be preoccupied with contributing work towards a playground and Gus is on the verge of obtaining the laundry as a front with a superlab that’s going to need to be built. By the way, I loved the Breaking Bad material in this episode. It’s one thing to finally see Lydia and Gus together, which will now help her introduction in BB feel more cohesive, but the idea of Gus strolling an empty laundry knowing that this is going to be the place where so much is going to happen, I’m just a sucker for it. Between the RV, the superlab, and Vamonos Pest, the superlab is personally my favorite place where Walt and Jesse cooked in terms of mood and catharsis.

At that, we approach the final four episodes of the season.