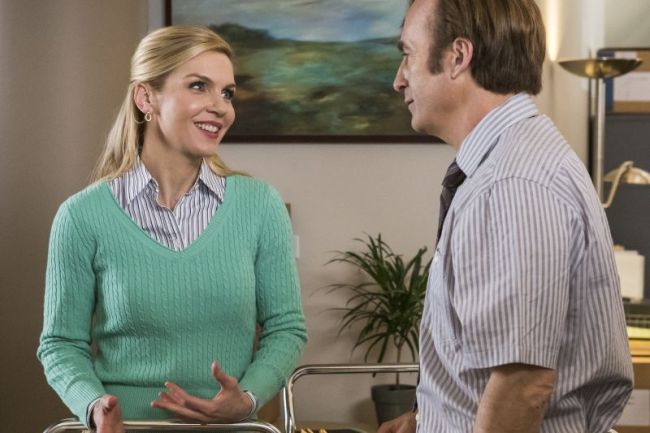 If “Quite a Ride” gave us a flash-forward to the collapse of the Saul era, book-ended with the major turning point that will propel him towards said era, then “Pinata’s” cold open shows us in flashback, the hopeful origins of lawyer, Jimmy McGill, followed by the rest of the hour book-ending the demise of this chapter of his life. We’re at a crossroads. We learn that Jimmy’s motivation to become a lawyer is just as intertwined to win Kim’s respect as it was for Chuck’s, reminding us that Kim is just as much a crucial anchor for his saving grace.

Unfortunately in present time, the wedge continues to be driven between the two. As Jimmy discloses his decision not to seek therapy, Kim uses this as an excuse to follow the career choice that makes the most sense for her (joining Schweikart & Cokely). They continue to omit their conflict by upholding a false pretense with one another. It’s a dance around facing the truth which will lead to the future of Wexler-McGill becoming no more than a pipe dream. I love how thick the tension is, derived from something so quietly subtextual and character-driven. Bravo for Gilligan and Gould for taking advantage of Jimmy and Kim’s prolonged divide, allowing us to toss and turn over the drama that’s found here. For a show that’s tasked with heading towards a certain, highly anticipated future, it’s fully aware of when it needs to stay put.

Odenkirk plays the moment with such unspoken devastation when Jimmy excuses himself from the table after Kim casually crushes the sole hope of them working together. Having Jimmy stand in the intersection between the restaurant’s kitchen and bathroom was a great staging choice as well to help convey anxiety and misplacement. The ‘path’ he heavily relies on to move forward with, so as to avoid navel-gazing, has hit a definitive fork in the road, which I feel the yellow sign on the wall next to Jimmy was appropriately tipping its hat towards. I also couldn’t help myself from having this Seinfeld line in the back of my mind.

Lets put this in perspective. Back in season 2’s “Inflatable”, Kim actively chose to join Jimmy under the same roof as two solo practitioners over the prospect of joining S&C, which was argued even with partner-track, to be a lateral move from HHM. She’s the one who proposed the idea of separate law practices due to Jimmy needing to play the law colorfully in contrast to her being straight and legitimate. Back then, you could tell Jimmy felt a bit conflicted with the proposal, considering it was not just a rejection of an ideal venture, but most importantly it’s a rejection of his values (if not a kinder rejection than Chuck’s).

That said, she did make a professional choice that brought her closer to him than anyone else. She accepted him to a degree and even surprisingly fights in his corner when Chuck brings the hammer down in the midst of the Mesa Verde files tampering. After Chuck’s death and the guilt she’s been reeling with ever since, Kim has changed her tune. Kim’s decision to join the ranks of S&C is very telling that she’s creating an exit strategy from Jimmy alone (not just Wexler-McGill), especially as he shows no effort to better himself and continues to keep her at an arms-length. I don’t know how much longer the show could restrain itself from an explosive confrontation, yet it’s successfully nail-biting the further it continues not to.

Not only is Wexler-McGill presumably over with, but the episode manages to wrap around from the early days of the show. Mrs. Strauss, the first client who served as a foot in the door for Jimmy practicing elder law, is revealed to have passed away in her sleep. Jimmy, for the first time this season, exhibits genuine grief upon hearing the news (as if he’s due for an emotional release) and even digs up the Davis & Main commercial she acted in during season 2. This sadness he feels is the first opportunity he can allow himself to feel bad. She represents a time, primarily in season 1, when he gave a genuine effort to stay on the straight and narrow, regardless of not being able to help himself from taking shortcuts along the way. Those days, properly illustrated in “Pinata’s” final scene are undoubtedly over.

After last episode, I was half-hoping that the show wouldn’t go in the direction of Jimmy taking revenge on the boys who mugged him, considering such popcorn satisfaction doesn’t really exist in real muggings, but in this case I’m wrong. Those kids have nowhere else to be. They’re going to be on the streets again and Jimmy isn’t some innocent passerby victim. He’s going to be back at it too and Slippin’ Jimmy needs to set things right if he’s to continue selling phones. Overall, I like how this was handled by using Jimmy’s business proposal to them as a mislead to his more sinister back-up plan.

It’s also appropriate that the line Jimmy crosses here is balanced between over-stepping into a situation that feels out of place for Slippin’ Jimmy but also not fall under a hyper-extreme Heisenberg moment. I don’t think even Saul Goodman would commit an act of physical violence against another if he could avoid it. Jimmy’s performance of intimidation towards these punks was great but I did wonder how much of it was borrowed from his extensive movie knowledge. I’d be interested to know whether any of the films up for an Oscar in 1993 contained a scene that mirrored his actions here.

I know this is a shallow observation, considering I have no proper knowledge of the actual contents of the film but it’s interesting how Howard’s End is a title referenced in the same cold open where Jimmy peruses HHM’s library, seeing as it marks the start of the war between the McGill brothers, in which Howard will be forced to wear a straight-jacket with an umbrella. Flash-forward to the present day of this episode and it doesn’t look like HHM is looking too hot in the aftermath. Not only that, but Jimmy ripping into Howard to stop wallowing over “one little set-back” and calling him a shitty lawyer, is finally answered with a long over-due “Fuck you, Jimmy.” It’s a line that felt so deserved, AMC (for whatever reason) didn’t even censor it.

Bottom-line, Howard and the firm are in shambles and with Chuck deceased, as well as there being no further reason to protect Jimmy anymore (which is all he ever really did as recent as taking the blame for Chuck’s death), Howard has every right to drop his sensibilities. It’s a long way from the pilot when Howard would entertain Jimmy storming into his conference room, demanding money. The thing is though, Jimmy is trying to help Howard here, even if he gets to enjoy knocking him in the process. It’s as if Slippin’ Jimmy, the scam artist, can honestly size up Howard’s strengths and weaknesses for what they truly are, and instead of using that to run a game on Howard, he’s outright sharing this intuition as a gift of tough love.

It’s one thing for Jimmy to be afraid of examining himself inwardly to face his darkness in order to move on from Chuck, but then there’s a character like Gus who revels and remains consumed by the inner-demons he harbors. It’s funny how in Better Call Saul, we learn more about Jimmy and Mike’s family than we ever did on Breaking Bad, but with the second show taking Gus on as a regular character as well, his supposed family life which was hinted at in Breaking Bad remains a mystery.

Whether that’s because he was telling a lie of their existence or not, and his implied relationship with Max was the last person he was ever close to, this scene still paints a pretty clear picture as to where his priorities lie. Gus is the guy who will ignore his own brothers just to take a long, unnecessarily drawn out act of revenge on an animal, which by nature is only feeding off the lacuma tree to survive. Fruit will grow back, but imagine when a human being such as Hector Salamanca maliciously snuffs out the most important person in Gus’ life. This is why we never see Gus’ family or home life detached from anything business. Revenge is his home and the story he eerily tells here of keeping the coati as a tortured pet shows us this is who he’s always been.

Mike making suggestions to Gus on how to make the German excavation crew feel at home, beyond basic shelter and necessities, is fitting here too. While Gus agrees and supports Mike’s idea, he’s much more invested with the revenge on Hector to appreciate the proper accommodation that he’ll be providing these men. It trumps him from even taking pleasure in his own business, let alone family life. As for Mike, it’s good to see he’s making such an impact on Fring’s operation, but I’m waiting for the conflict to arise which will spark the beginning of his transformation towards a cold-blooded murder-for-hire. I wonder what issues the spoiled newcomer Kai is going to present and if the development of this housing situation is going to lean towards Mike being forced to get his hands dirty.

Oh and of course, it was wonderful to see Michael McKean as Chuck again, who’s still shown brimming with subtle resentment towards Jimmy even when he was in the mail room.