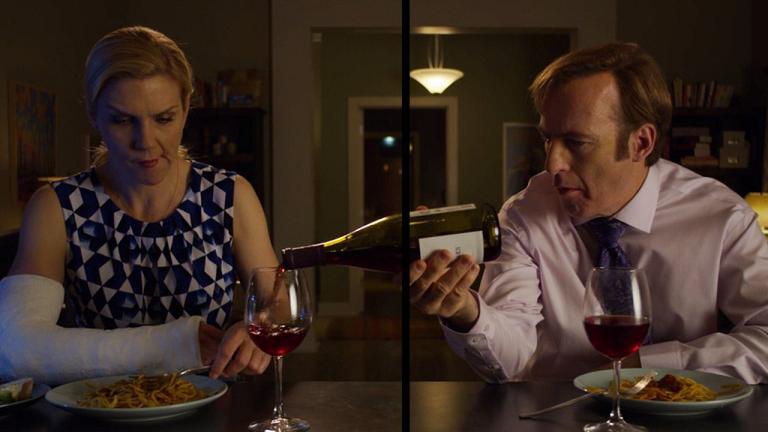 Ever since the wait for season 4, I’ve wondered how the show is going to respond appropriately to the events of last season while keeping Jimmy’s extensive PPD period engaging and essential to the overall story. The aftermath of Chuck’s death is enough drama fuel to go on, of course, but at the same time, 10 months is a long while for Jimmy not to be a lawyer and at the show’s pace, we don’t need to actually experience that time in order to feel the blow of Jimmy’s punishment. The driven wedge between Kim and Jimmy has been so substantial and intricately told across (what will be so far) most of the season, that it still came to a surprise when we got that wonderfully constructed, artful montage pushing us from 2003 into the summer of 2004, a month short before Jimmy is reinstated. It’s at this point that I predict the last three episodes will run out the remainder of his month with focused story that will help launch Saul, the lawyer, for season 5.

The split-screen montage, played to Lola Marsh’s extended cover of Frank and Nancy Sinatra’s “Something Stupid” (created exclusively for this episode) is a cathartic, rewarding payoff as to why this show should never gloss over the smaller details. We know why they’re drifting apart and have felt it, so if time is to accelerate, this scene successfully capitalizes on that feeling. Other shows, guilty of using montage as a lazy story device purely to avoid telling a story, should be taking notes from Better Call Saul, not just for when it’s creatively necessary to implement into a script, but also how to make it entertaining and meaningful. I love how this show is always taking on fresh and inventive directing/editing techniques in delivering these pieces, instead of relying on the former show’s signature use of time-lapse (which even Breaking Bad didn’t necessarily rely on).

The state of Kim and Jimmy’s relationship following this sequence is irrefutably worn out, yet they’ve forced each other to function as the world’s most frustratingly unresolved couple, Remember how I’ve been anticipating some ugly explosion between the two this season? Well, it’s been nearly a year since the last episode and no such confrontation ever reared its head. It’s unnerving and ironic, because they seem to be some of the two greatest problem solvers on the show. Whether it’s a scam from Jimmy or a case Kim’s working on, they fight tooth and nail to ensure resolution. Legitimate, illegitimate, destruction, construction… Together, they’re like a paradox, but just like the superlab continues to bear parallel metaphor, they’re “not quite impossible”, if not a little overdue in becoming fixed or fully realized.

The distance illustrated between them in “Something Stupid” is nothing short of jarring, especially since they have become more public with their relationship. Back in my review of season 2’s “Rebecca”, I mentioned how dinner parties (or in this case a cocktail party) tends to be the perfect time to put up a front and have a passive aggressive dance take place around a deep-seeded issue. In the cold open of “Rebecca”, Jimmy used his charm and humor to take undermining shots at Chuck’s profession and ego, ultimately leaving Chuck insecure with his marriage. The cocktail party of S&C is no different as Jimmy takes this opportunity to peg Rich Schweikart into a corner by getting his employees jazzed up for an expensive retreat. What Jimmy really is doing here though is rubbing Kim’s nose in her own success and intentionally embarrassing her. It’s a message of their differences and how they don’t belong together if they can’t be on the same page. It’s something they fail to outright address no matter how much time goes by.

After Huell sidelines a cop with a bag of sandwiches, Jimmy has no choice but to reveal to Kim that he’s been selling drop phones on the street. This only further exemplifies how much they have grown apart as she responds with more validation of their crumbling relationship than the old Kim (even from last episode) would have reprimanded him over. It’s not until she hears Jimmy spoken of as a scumbag witness by the opposing counsel, before her concern for Jimmy truly registers. Her line “You don’t know the whole story” is telling to the tragedy of Jimmy’s life that she’s been drawn to ever since she discovered Chuck’s refusal to hire him at HHM.

I noticed there were two misleads with Huell in this episode. The first is where Jimmy is giving a tour of an office space, where you would presume he’s pitching the place as some desperate, last ditch effort to Kim, (or more likely to Francesca, another supposed do-gooder), but instead the reveal of Huell completely undercuts those expectations. The second instance is towards the end of the episode, where after Kim hears Jimmy has been peddling phones to criminals, she’s shown making an urgent call, requesting to meet the person on the other line. Even with Jimmy and his Esteem out of focus in this shot, you would think that the person Kim most urgently needs to see is him. Again though, it’s Huell, and the only news she has for Jimmy is that Huell will have to serve time. Both misleads here show how determined they are to keep to their separate paths, but the most surprising outcome is how Kim’s concern for Jimmy, instilled anew by speaking to the cop’s lawyer, is what causes her to make a decision completely antithetical to what the entire hour has been driving at.

There’s many layers to this twist, beyond just the mystery of what she plans to do with these pens and markers. For one, the last time we saw Kim driving her car in silence, she was met with a violent car crash, arguably brought on indirectly by her subconscious guilt to what she and Jimmy did to Chuck in court, and due to her anxiety of Jimmy’s misbehavior in general. It’s why she was operating on little sleep as she buckled down into her work for Mesa Verde. There’s also the idea of Kim and Jimmy’s separate paths. By having her take a sharp, risky U-turn, it helps visually convey the compromising decision she’s making in favor for Jimmy’s illegitimate practices. Finally, in the episode’s opening sequence, Kim took up half the screen, divided from Jimmy, whereas in the final shot, Kim gets so close to the screen that she envelops it entirely to the point where the single frame can’t even capture her properly. From a visual standpoint, all of this helps elevate the gravity of the moment, especially as she’s cut off from the frame while making the call to Jimmy, conveying a sense of wrongness (even stupidity) in this decision.

Then there’s Gus and the superlab plot. Look, personally I enjoy how the show has handled these stories. I definitely think the lens of Nacho is a predicament that fires at the highest cylinder and not seeing him for the last few episodes certainly leaves something to be desired, especially when the Gus/Hector plot is more about filling in the blanks. That said, I like the little we’re being fed with and how quickly it’s progressing (especially with the time jump). I’d be lying if I told you I didn’t feel absolutely enthralled by Giancarlo’s performance when that helpless smile comes over Gus’ face upon realizing he can now keep an entombed Hector under his thumb. I’m also curious to know how many shots it must have taken for him to give that subtle spike into the camera without destroying the fourth wall. It reminded me of Breaking Bad’s “Hermanos” when Walt spikes the camera in the same fashion when Hank tells him that something deep down says Gus is his guy.

As for the superlab, other than standing as a string of metaphors for Jimmy’s story, I strongly believe it’s building to something beyond just ‘filling in the blanks’, especially as the German engineers become more restless and agitated with the project. As Mike continues to bond with Werner, I’m worried what happens to him and his team after the superlab is finished. I feel the longer things get delayed, the more likely something is going to go wrong, and a loose cannon like Kai or any of the others are on the verge of being the spark to that. All of that aside, for me, the superlab is a grander spectacle than just simple Breaking Bad fan-service. There’s a monolithic, transfixing quality to it’s creation that I find fascinating. Peter Gould even mentions in the insider podcast, how the superlab’s excavation, to him, mirrors 2001: A Space Odyssey’s moon excavation scene, and I couldn’t agree more. I just eat that stuff up. Plus, Mike scolding “Boys! Cool it!” in what I would assume is clunky German was great, and if it doesn’t become a meme of some sort, then the internet has failed.

– Burl Ives’ “Big Rock Candy Mountain” was a fitting choice of song for the Germans arriving at the laundry, especially how the lyrics keep tediously repeating, emitting the feeling of how exhausted they are. And yeah, big rock candy mountain is obvious for what the superlab will be used for, but I also like how it’s a humorous nod to what Walt’s blue meth is actually made of from a production standpoint.

– When Kim was receiving her Mesa Verde trophies for each state completed, I freeze-framed to see if Nebraska was one of them, and sure enough it’s front and center. I’m still dying to learn more context for her past there.

– Here’s a little fun fact I’ve been anticipating. The next episode “Coushatta” will mark the 100th episode of the Breaking Bad/Better Call Saul universe (62+38=100).