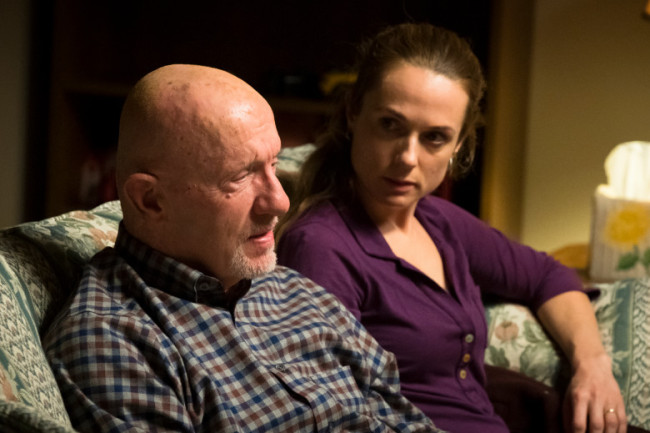 I’d like to commend the season so far for how they’re handling Jimmy’s story. It’s one thing to create the most gaping divide between the audience and his head space than there’s ever been, but the peripheral focus and slow push forward across a four episode duration makes his transformation all the more excruciating to witness. It’s like being forced to watch a car wreck in slow-mo except Jimmy’s still fumbling to get his keys in the ignition. Jimmy spending the majority of the episode bouncing a ball against the window (in an overlooked nutshell) somehow fills me with just as much anxiety as Nacho dreading imminent bloodshed as the cousins go on a shooting spree. That’s quite a feat. Add to the fact that he’s hiding his criminal behavior from Kim and it’s all the more insultingly painful and frustrating. It’s like the writers are giving what many of the more impatient fans want in the most conflicting way. Jimmy is indeed on the brink of the change we’re anticipating, but Saul Goodman needs to rise from the primordial ooze rather than spun around and revealed in the snap of a finger.

Jimmy’s story is pushing forward though. He’s making criminal connections, building a relationship with Ira, and by the end he takes Ira’s advice into considering multiple cell phone burners by going to the absolute, dismissive extreme of using his vacant CC Mobile location to advertise for a sketchier demographic. The large, blatant paint job (applying the same color scheme as the Better Call Saul logo) of “Is the Man Listening? Privacy Sold Here” alone helps feed into how unhinged Jimmy is. The fact that he took this job (in which moments ago, he turned down) just to avoid Kim’s suggestion to seek therapy also solidifies his unwillingness to get better or mend the divide between him and her. I don’t know how long Jimmy will be able to entertain CC Mobile’s resources for this seedy detour, but with a little more hustle on the streets, I believe he could begin to build a new client base for the future. Regardless of the plot that’s moving into place, I feel confident that Jimmy’s character-driven sense of misguidedness, remaining adrift from Kim and the audience in an opportune, crucial moment of grief, will prove just as essential to a grander payoff.

This season is just about the mystery of where Kim’s head is as it is with Jimmy’s. As Jimmy’s world secretly spirals, she’s left to paddle a rowboat one-handed while also being kept at a distance from the audience in terms of what her next move is. We find her at the courthouse, not for research, but for observation. She certainly seems to be going through an existential crisis, feeling unfulfilled with the Mesa Verde proceedings, and perhaps looking for inspiration. When Judge Munsinger hits the nail on the head towards said likeliness of that and explains how she’s not the first person to use his court room for soul-searching, you would think that Kim’s decision to keep observing would suggest that her reasons aren’t as transparent.

But it is soul-searching. Transparency doesn’t trivialize her desperation to repair an inner-conflict (no matter how many people have felt it before), being one that extends beyond the mundane trials of Mesa Verde, but her longing to build stability for Jimmy’s grief and a bridge for the gap in their relationship that’s currently being buried with Thai food and movie marathons. By observing opening statements, sitting closer to the side of the guilty party, she could be trying to find the best approach in getting through to Jimmy. As viewers, we’re left out in the open with this one, which again is owed to tension built upon uncertainty as we anticipate a confrontation between Kim and Jimmy that I feel is overdue (as part of the story), especially in an episode titled “Talk”.

While Jimmy is avoiding therapy, we open the episode with a flashback montage (played to The Ventures’ “Grazin’ in the Grass”) of a young Matty watching Mike pour and mix cement, followed by a flash-forward of Mike in group counseling having just finished disclosing something very heavy. It’s telling that this memory of Matty is certainly the driving force behind whatever bomb was dropped in the room. Is it a moment of self-destruction? Did he implicate himself in any way towards Matty’s death or worse, the murder of the killers? The speculation throws you for a loop as it’s crazy he would even say anything about that, but after the gravity of the cold open, you have to wonder what else could Mike reveal about Matty that Stacey hasn’t.

I love how this hangs over the episode and how, in the show’s classic fashion, the reveal of what truly is going on in the scene and the subtext to what expertly brought it on (indeed Matty-related) is much more fitting and meaningful than him sharing anything outright about his son. I admire how, across both Breaking Bad and Better Call Saul, this is the first flash-forward, self-contained within the hour, that doesn’t even come close to bookending the episode. It helps sell the point that this moment closes a door and something that’s going to be put well behind in the rear-view mirror as Mike digs his front foot deeper into Gus’ world (Mike literally and dramatically stepping forward towards Gus before the credits roll).

This not only turns out to be a dismissal of the group and the end of him supporting Stacey by attending, but he’s sadly disbanding from Anita (a character I’ve really enjoyed). The story initially and innocently set itself up (not unlike one of Mike’s heists), where him and Anita don’t just have a fun bet, but a shared goal in determining whether Henry is a pathological liar. However, unlike most of the goals Mike follows through with, this one gets personal and goes completely awry, resulting in an unexpected, ugly outcome. The look on Mike’s face when Anita steps in to calm him down expressed such genuine sorrow over the unfortunate rejection he needs to express, one that will likely end their platonic relationship in the process.

In Mike’s defense, his outburst holds ground considering not only is Henry outed as the obvious fraud Mike sees him as, but the group is outed as glaringly blind and oblivious for entertaining his lies for as long as they did. From Mike’s perspective, it proves how unproductive the atmosphere is for him. It’s not to say that group counseling doesn’t help, but that all the pieces were in the right spot for him to realize he needed to get out of there and Stacey admitting that she went hours without thinking about Matty, was the spark. What’s ironic is that Stacey was the one in last seasons’ “Expenses” who had to remind Mike of how he used to teach Matty as a kid how to mix cement, so it’s appropriate that’s what we’re shown in a moment where he’s fuming over the idea of Stacey becoming increasingly forgetful. It might not just be about Mike being upset with her, but with Mike being upset with himself, feeling more guilt for the part he played in his son’s death as Matty continues to become a distant memory.

Then there’s Nacho and the relentlessly grim situation he continues to have no control over. Every episode of this season seems to outdo itself in terms of making matters for him worse. We don’t know Nacho’s full history with murder, but the goon he’s forced to kill is the first time on the show that we’ve ever seen Nacho kill anyone directly by his own hand (save for the attempt on Hector which got him into this mess). I appreciate the creative choice to show the cousins’ shooting spree primarily from Nacho’s perspective as the chaos is more auditory from beyond the wall before Nacho realizes he’s going to have to join them. It’s clever how the set location of this shootout was properly mapped out for the audience in the beginning of the episode with the tracking shot that followed Gus’ henchman through the area. By leaving the violence mostly to the viewer’s imagination, our previous knowledge of the geometry and scale of the place helps serve as a disturbing base.

I think returning Nacho to his father’s home is the appropriate cry for help that this story needs. It’s been made clear to Manuel that Nacho is in over his head, but now that he sees the physical, bloody havoc that’s been wrought upon his son, there’s no way he could turn a blind eye. He loves him and understands the police cannot be notified, which means in some way or another he’s going to get mixed up in all of this. It’s worrying and if Nacho’s situation is to follow the pattern of getting worse by the episode, I would hate to imagine what that could mean for Manuel as he’s pulled closer into the drama.