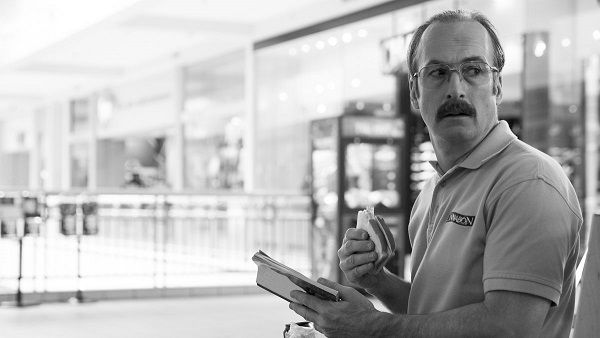 It’s that time of the year again. It’s been a while since I wrote a reflection/review/analysis on anything but here we go!

We start off with our third post-Breaking Bad flash-forward of Gene and I felt it was very telling to one of the mission statements of this season, being that this show is about to take a major and scary acceleration forward. “Sugar Town” by Nancy Sinatra is the least apologetic tracks to open a season yet. It’s optimistic. Promising. It oozes change. Almost immediately, the Cinnabon is under the spell of a rapid time-lapse. After, Gene is shown reading The Moon’s a Balloon by David Niven which according to just a quick wikipedia synopsis is described as “a funny yet tragic tale, detailing everything from the loss of Niven’s father to his natural knowledge of how to lead a good life.” And I think this is a crisis similar to Gene’s, in that he has suffered a spectacular loss. Those he loves, his freedom, and most importantly his own identity. And judging by his sudden outburst after ratting out the kid in the photobooth, he’s fed up with who he’s become. He’s fed up with feeling sorry.

“If I had a million dollars or ten
I’d give it to ya, world, and then
You’d go away and let me spend”

This line pretty much sums it up for me. The world has put Jimmy/Saul/Gene in a place due to the consequences of the choices he’s made in his life, and Gene adheres to it because for the longest time he feels it’s deserved. He’s miserable and the world, just like the cop in this opening sequence, keeps telling him “nice job”. Nice job to staying in your place and doing what’s right. Right, right, right. Nice job for no longer flipping switches off when clearly instructed not to. Gene in this cold open has finally realized, and I believe spontaneously, that enough is enough. He’s Saul Goodman and there’s no way around it. And if there’s any indication that we are going to follow up on Gene sooner than usual, it’s that we end on a cliffhanger which has never happened in any of these flash-forwards. So whether we return to his collapse in the fashion of Breaking Bad’s second season or just once later in the season, we will undoubtedly get that follow-up before the season 4 premiere. Last season the opening title sequences introduced a singular drop into black and white but now it goes in and out three times.

“The Adventures of Mabel” (according to Vince Gilligan on Talking Saul, a tribute to what his mom read to him) offers us such a specially rich moment that’s free of any agenda from either side in the Chuck/Jimmy war, and that moment is so firmly rooted in nostalgia shared between siblings. Something of which, from my own experience with my sister, is something that’s almost inevitable not to get lost in, no matter how aware you are that it’s an escape from any pressing, underlying conflict. It’s warm, it’s bubbly, and even Chuck couldn’t resist it. My god, Michael Mckean’s face when he says “I read it to you”. The scales of resentment just fell in that brief moment and you witness a gleaming reminder that he’s a sucker in his love for Jimmy. However, as Tony Soprano would say, “‘Remember when’ is the lowest form of conversation” and I believe Chuck is in the similar mindset of that. It’s an unearned distraction. As soon as Jimmy begins to go to town (or Sugartown) on the nostalgia train, Chuck quickly brings it to a stop. The shift between a rare, sweet moment and his cold, deadpan “You will pay” is devastating and weirdly admirable all at once.

Many times throughout this episode I was surprised by how many tertiary characters played and contributed a larger role to the overall story. When I expected to see Mike meet up with Nacho in the dead of night, we instead are treated to the return of the veterinarian. When I expect to see Hamlin or possibly a police officer in Jimmy’s waiting room, we’re revealed Captain Bauer from last season’s “Fifi” (a confrontation that, thinking now, makes less sense if it didn’t happen). Paige from Mesa Verde unintentionally plants insecurity in Kim when describing the fallout of the botched hearing. Ernesto becomes more than just an errand boy but an important cog to Chuck’s plan. For an episode that stresses “the world”, I like that we’re getting such a fine spread of characters at play. Every piece matters. Nobody is beyond the realm of being affected by the main characters’ actions.

Speaking of the veterinarian, I like that moment where he’s concerned about the dog. You have to remember that Mike is a guy who last season hijacked a truck, got a good samaritan killed, and waited prone on a hill with a sniper rifle set to pick off the cartel. And for what? Now he’s caught up in a cat and mouse over a mysterious third party that’s tracking him. Concern for the dog serves on some level as a reminder for Mike to keep tabs on the good things. Not just the dog, but Stacey and Kaylee, rather than get swallowed by whatever this other stuff is. The way the episode ends with him driving off down a drizzling street, with the light turning green conveniently, and him just getting absorbed into this blurred destination. Perfect illustration of where his character is heading.

Meanwhile, the other vet has stopped by Jimmy’s place of work and man, whether it’s owed to the writing or from the performance, there’s something so endearing about Bauer, the Air Force Captain. This entire back and forth was thrilling.

Bauer is passionate. He’s not smug in his self-righteousness. There’s nothing strong-arming about him but he’s put in this unwanted position. There’s just honest, genuine good in him and even when he’s here to face off with this blatant fraud, scumbag of a lawyer who has made a mockery of the Captain’s hospitality, he does so with a sense of just needing to know, person to person, why Jimmy did this to him. He’s strong and he’s willing to do whatever he can to rectify the situation, but this is something you can tell truly hurts this guy. It’s so human and you can tell he’s just waiting for Jimmy to show some form of sincerity before he can move on. Anyway, fantastic actor. I’m glad his one-time appearance from last season provided the opportunity to deliver a scene like this. It really was unexpected. If anyone is deserving of giving an uptick in recruiting numbers, it surely would be a character like Captain Bauer! Odenkirk was awesome here too. As wrong as Jimmy is, I have to admire how unfazed he is when being called out. The way he suddenly blurts out “Always on your high horse…” was pretty much the reverse of him playing it straight in the cold open before blurting out “Say nothing, you understand! Get a lawyer!” The former is his true self on the offense, revealing a shred of conscience, while the latter is his false self, self-preserved, but then revealing what he truly believes in.

Kim obsessing over the punctuation is very appropriate in a case she doesn’t feel is earned. It reeks of Jimmy’s tampering. Whatever Chuck has planned, (and I love how much of a fog we’re in with that), it’s going to fall hard on Kim too. The look on Howard’s face while he listened to the tape, becoming lost in his own thought… you can tell Kim is more on his mind than Jimmy is. The tension between Howard and Kim last season was undeniably shaky. I can’t wait to see what transpires in regards to that. Even if it just means shedding more light on Howard’s character because personally, I find him very interesting.

As for Mike, I love how spooked he is. We’ve never seen him this spooked because he’s never dealt with someone so on top of their game, where they might as well be a ghost. In the season finale review, I mentioned how the universe is very present when the crickets stop and Mike’s car horn goes off within a vast, empty desert. The universe was very present in the season 2 finale of Breaking Bad as well. And Gus was just getting introduced, almost like a test to Walter from the heavens that if he follows up in the pursuit of this dark, criminal underworld, it’s going to be a point of no return. I love that gorgeous wide shot when Mike stops his car in the desert to check for the bug (those storm clouds with the pocket of light that’s pouring down, followed by another frame with a strike of lightning), as well as the time-lapse shot later on of Mike’s house, as if it’s teetering upon the Earth itself haha. Beautiful shot. Then of course, those long, silent scenes Mike gets throughout the episode. David Porter’s scoring…that snare drum when the car is getting taken apart…the mad dash out of the desert…I could go on forever.

– I like how Jimmy goes on an excited tangent about some neighbor girl who used to play in the dirt haha. It’s fitting too that he liked her and a proper spot for Chuck to interrupt. It also seemed fitting that Jimmy would have a red, knock-off, Daffy Duck-like night light that Chuck and family were worried would burn down the house.

– As you can tell, I’m of the opinion that Chuck intended for Ernesto to hear the tape knowing of Ernesto’s alliance with Jimmy. The triumphant flip of the tongs was the subtle tell. I still don’t know how that can help Chuck though, but I’m excited to find out. Regardless, it was tough to watch Ernesto initially getting screamed at. Poor guy.

– I’m guessing we’re going to be seeing Gus soon, but I like how the show is taking its time, allowing Mike to really earn the discovery. I hope the next episode follows suit because finding Gus should take some finesse. Don’t ruin the varnish in getting there.