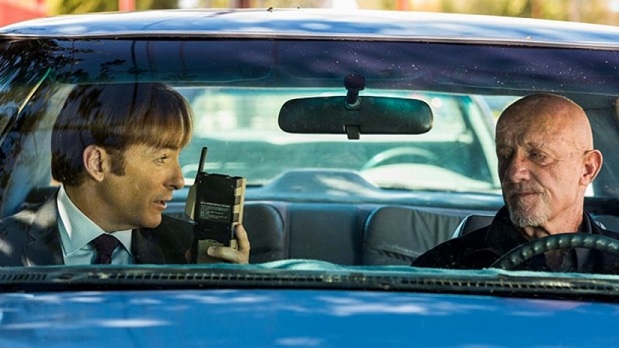 If I had to put this episode in a word, I’d go with apprehension. It was a brilliant hour that sets the stage for the biggest push forward into Breaking Bad territory that we have seen so far. I’m excited. It’s a development that has unwrapped itself to the audience quite elegantly, but at the same time I don’t exactly know what to make of it as of yet. The notion of introducing Los Pollos Hermanos, Gus, Victor, and the complex web of operation that comes with that is going to ask a lot from this show. A show that has done a very good job at defining itself as an independent companion piece. I believe Gilligan and Gould will make this work and offer a story that isn’t just Breaking Bad origins. While that is absolutely an important element for the series and a necessity worth exploring, I still want to come away from Better Call Saul having been taken on a specific, exclusive journey in the fashion that only this show could have been able to provide. For instance, finding out how Hector ended up in the wheelchair should ideally play as a backseat ‘aha!’ moment in the midst of a grander tale. This is something that is going to be conceptually nerve-wracking as we go forward but fortunately will help add to the tension. In the introduction to all of this, Gus’ henchman, doing a crossword puzzle, circles the word ‘trajectory’, which I like to take as the show giving a self-aware wink to events preset in motion and hopefully of what can be accomplished in getting us there.

The episode opens in a rather eerie manner. Chuck is whistling in the dark, sipping tea, leering outside, and all the while there’s someone in the house. First you notice a glimpse of someone’s shadow, and then an unrecognized figure in the mirror, and finally you’re revealed this complete stranger who’s playing solitaire so nonchalantly, he might as well be a ghost. I like that the show didn’t feel the need to explain who this person was, You can figure it out, but there’s an air of mystery, and out of context, his presence feels just plain strange. Perhaps with the blueish tone of light that’s usually used to signify the flashback/past, and also due to my initial presumption that it was her in the mirror, I actually feel the absence of Rebecca in this scene, which is interesting since she’s brought up at the very end, by Jimmy. The first mention of her since she was introduced. You can just really feel that Chuck leads a completely different life now compared to what he used to have.

“Witness” seems to follow the theme of characters trying to peek into or insert themselves into places they may or may not belong. For starters, Mike is very cautious when observing the mysterious web of Gus. He is motivated to discover exactly what type of animal he has brushed shoulders with, to assure his own safety. On some level though, it plays like a new kid in town lurking in the shadows and peeking over the fence while kids of his own stripe play in next yard. Knowing that this is the environment he’s eventually destined for, the slow reveal of the Los Pollos Hermanos sign worked wonders. Here I am, too fixated on the ‘speed hump ahead’ and ‘dead end’ sign that caused me to remain a slight beat behind of what was happening in the bigger picture.

The return of Gus sweeping in an unfocused background while Jimmy studies the man with the knapsack was also a touch of class and a joy no matter when the realization hits you. Jimmy is also a character who’s trying his best to test the waters of another world or in the very least use his venture with Mike as an escape. Perhaps he has more respect for Mike than he did his own father, or maybe it’s a pathetic attempt to channel some faux older brother/younger brother dynamic that is free of the usual judgments but hes definitely making his best attempt to scratch his way in. He wants to make Mike proud of his talents, whereas Chuck would be ashamed.

It’s great how the show figured a way to have Jimmy and Gus clash without retconning Saul’s “I’ve never met the guy”.

I like how in the upwards POV shot, Gilligan uses the ceiling fan to create a sense of anxiety/danger while Jimmy continues to be transparent and underestimate Fring’s intelligence. Slippin’ Jimmy can be slick when playing a con, but if Mike is subject to missteps when getting a lead on the master, Jimmy never stood a chance. What I find the most engaging about this scene though is not so much that Jimmy/Saul is finally in the presence of Gus, but more that Gus is in the presence of Jimmy. Bob Odenkirk’s character is so rich and full of such magnificent depth at this point, and the highs that Bob Odenkirk continues to hit with the character just continues to astonish me. Even though Gus was several steps ahead of Jimmy in that scene, there’s still a quick, little expression that he gives after Jimmy leaves, that is almost as if he still wasn’t prepared for how odd of a fellow Jimmy would be. Despite seeing right through him, Jimmy is still shameless, commits, and is charming to boot and even though Gus’ nice guy facade had to entertain it, I believe part of him briefly was caught up in the spell of Jimmy McGill.

One character that doesn’t need to scratch their way into any new avenue of opportunity is Francesca and it’s mostly because Jimmy is doing the scratching for her by accelerating the interview process. I’m sure the last thing she expected before walking through the door, was to be speaking on the phone in a folksy voice singing the praises of a good cracker barrel. It’s sad to see an optimistic, hopeful version of this character knowing how unenthused she will become. If she undergoes such an unfortunate change, I can only imagine how defeated a character in closer proximity like Kim would look like in a Breaking Bad or post-Breaking Bad world. Nonetheless, Tina Parker has some serious comedic chops and I look forward to seeing more of her.

As suspected, Ernie eventually dropped by Jimmy and Kim’s place of work to warn of Chuck’s plan. Again, I feel on some level Ernie just wants to be more involved in the world of Jimmy and Kim. Not Chuck’s. Possessing crucial information that entails Jimmy in such a big way makes him feel relevant and not some old forgotten friend/peer from the days in the mail room. His attempt to present himself as an ally is rather clumsy though, as Kim just wants him to cut to the chase.

Then there’s Howard half-running through people’s backyards and hopping fences. This…is excellent. It reminds me of those brilliant, bizarre moments you would get on Mad Men like Pete falling down the stairs or Ken Cosgrove tap-dancing. While searching for the legit video, I’ve already come across something like this:

It feels appropriate too because this is what comes from entertaining Chuck and the war between the McGill brothers. These are fences that Howard does not want to be hopping over. The world of Chuck is not a world he’s interested in, but of course Chuck is an important man at the firm so he’s forced to play a little daytime manhunt. It’s not to say that Howard doesn’t like Chuck, but he could definitely do without the never-ending nonsense. I’m so glad the show recognizes the comedy of the situation regarding Howard’s character. Patrick Fabian needs more scenes like this.

Finally, to expand on what I already briefly touched on, this episode had me floored in Bob Odenkirk’s performance. Not just for the incredible fit of fury he goes into in the very end, but also just how rocked he was at the news that Chuck recorded him. You can feel the temperature in Jimmy’s character. The eccentricity, charm, and psychic glue that makes him who he is, nearly evacuates completely by the time he closes the door on his last client. That downward shot on him when he closes the door translated so much hurt. It’s one thing that he seems to have oddly retreated to Chuck’s ‘thumb over thumb’ method of removing the tape, but what I really love is how self-aware he becomes. Usually it’s us, the audience, that can draw symbolism in relation to a character. Last week, I mentioned his fondness for the girl who plays in the dirt, or the knockoff night light that might burn the down the house. Here though, he’s completely aware how his ‘Morning over the Sandia mountains’ artwork might read as a stock market crash, and throughout the episode that’s all you’re given to take it as other than it being inspired by the Wexler and McGill logo. For him to outright bring attention to that expresses a deep sense of existentialism. He’s sick of constantly being treated and dissected like a traveler in some foreboding tale when his intentions, for the most part, are meant to be sweet.

I’m not sure how I feel about Chuck’s undying persistence to destroy his brother, but Jimmy does deserve comeuppance over what he did with the Mesa Verde files. The fact that Jimmy thought he could dance his way out of that was incredibly shortsighted and even adds insult after injury to assume Chuck should shrug it off. At the same time, I don’t think Chuck understands how hurt Jimmy is by this. The only way Chuck was able to get the upperhand here was by manipulating the love Jimmy has for him and you have to admit, it’s cold. To conclude though, in an episode that features various characters trying their best to navigate themselves into places they may or may not belong, it’s capped with Jimmy physically forcing his way into Chuck’s domain. And in a world of Chuck, there’s a special place waiting for Jimmy.
Things to note:

– The discussion of DMV vs. MVD in Francesca’s interview was included as a way to make up for a little writing snafu in Breaking Bad. In certain bits of dialogue, Saul and Hank use the term DMV, but New Mexico refers to it, quite traditionally, as Motor Vehicle Department. Jimmy stating (paraphrasing) “It will always be DMV for me” is in the same camp of the roof pizza getting an explanation for not being cut (“…they pass the savings on to you” – Badger). Innocent patchwork like this is fun and it reminds me of The Sopranos, having a character tell Tony in a later season, “A don never wears shorts” which was a common nitpick in reference to the pilot.

– I love that shot of the knapsack guy atop the culvert (bridge with three open drains). It felt like something out of Hitchcock or even Tim Burton by the way it looked like a toy model with a shrunken person walking on it.